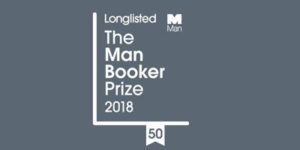 The longlist of thirteen semi-finalists for the 2018 Man Booker Prize, one of the most influential annual English-language international literary fiction honors, has been announced from London. They were chosen from more than 170 submitted books being published in the UK between October 1, 2017, and September 30, 2018.

Here are our longlisted titles published by Penguin Random House imprints in the U.S., Canada and the UK:

THE WATER CURE by Sophie Mackintosh

(Earlier this month, Mr. Ondaatje’s THE ENGLISH PATIENT was awarded the Man Booker Golden Prize, honoring the best work of fiction from the last five decades of the Man Booker Prize, as chosen by five judges, and then voted on by the public.)

THE LONG TAKE by Robin Robertson

FROM A LOW AND QUIET SEA by Donal Ryan

EVERYTHING UNDER by Daisy Johnson

THE OVERSTORY by Richard Powers

THE MARS ROOM by Rachel Kushner

The shortlist for this year’s Man Booker Prize will be announced on September 20, and the winner revealed on October 16.

We warmly congratulate our semi-finalists, their editors and publishers.