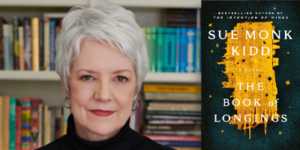 Sue Monk Kidd will discuss her now novel, THE BOOK OF LONGINGS (Viking), at a virtual Barnes & Noble event via Facebook Live on Wednesday, April 22, at 7:00pm (ET).