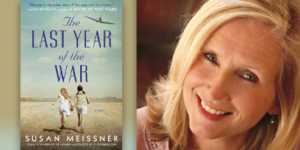 Susan Meissner appears on the “Great Thoughts, Great Readers” program to talk about THE LAST YEAR OF THE WAR (Berkley) via Facebook Live, Tuesday, April 7, at 1:00 pm (ET).

Her most recent novel, THE LAST YEAR OF THE WAR, revolves around a German American teenager whose life changes forever when her immigrant family is sent to an internment camp during World War II. This story has great resonance for our own times and challenges the very notion of who we are when who we’ve always been is called into question.

Meissner is a former managing editor of a weekly newspaper and an award-winning columnist. She is the award-winning author of A Fall of Marigolds, Secrets of a Charmed Life, Stars over Sunset Boulevard, A Bridge Across the Ocean, As Bright as Heaven, and The Last Year of the War, among other novels.

!!As a reminder, if you are posting to a personal or other non-PRH account you must include the hashtag #TeamPRH.”!!