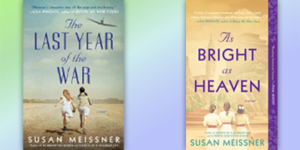 Susan Meissner will be talking to readers about THE LAST YEAR OF THE WAR (Berkley) and also about AS BRIGHT AS HEAVEN, her novel of the Spanish Flu pandemic of 1918, live on her Facebook Author Page beginning at 8:00pm (ET).

Her most recent novel, THE LAST YEAR OF THE WAR, revolves around a German American teenager whose life changes forever when her immigrant family is sent to an internment camp during World War II. This story has great resonance for our own times and challenges the very notion of who we are when who we’ve always been is called into question.

Set during the Spanish flu pandemic of 1918, telling the story of a family reborn through loss and love, AS BRIGHT AS HEAVEN features a mother and her daughters who find themselves in a harsh world not of their making, which will either crush their resolve to survive or purify it. As the pandemic claims more than twelve thousand victims in their adopted city of Philadelphia, they find their lives left with a world that looks nothing like the one they knew. But even as they lose loved ones, they take in a baby orphaned by the disease who becomes their single source of hope. Amidst the tragedy and challenges, they learn what they cannot live without—and what they are willing to do about it.

Meissner is a former managing editor of a weekly newspaper and an award-winning columnist. She is the award-winning author of A Fall of Marigolds, Secrets of a Charmed Life, Stars over Sunset Boulevard, A Bridge Across the Ocean, As Bright as Heaven, and The Last Year of the War, among other novels

!!As a reminder, if you are posting to a personal or other non-PRH account you must include the hashtag #TeamPRH.!!