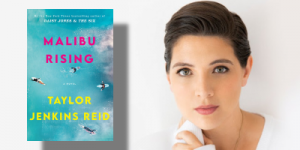 Taylor Jenkins Reid’s MALIBU RISING, published by Ballantine, is our new Igloo Book Buzz selection, and was named the June #ReadWithJenna Book Club Pick on NBC’s Today Show (to watch video of this segment, click here). MALIBU RISING is a story about one unforgettable night in the life of a family: the night they each have to choose what they will keep from the people who made them . . . and what they will leave behind.

In making her book club announcement, Jenna Hager Bush said, “I felt like MALIBU RISING was a compulsively fun read that anybody would want to throw in their beach bag. I think after the year we’ve had, everybody is looking forward to summer and this book felt like the perfect kick-off.”

Taylor Jenkins Reid commented, “I am so thrilled for MALIBU RISING to make its way into the world. I think, in many ways, it’s my most escapist and fun book yet. But it is also my most heartfelt. It was a true labor of love and I’m so excited to finally share it.”

Ballantine SVP, Editor in Chief, Publisher Jennifer Hershey, said, “Given how beloved Taylor is for her previous books—Daisy Jones & the Six, and The Seven Husbands of Evelyn Hugo—outdoing herself yet again should have been no easy feat. But Taylor is so determined to grow with every book she writes, and I knew she would push her own boundaries as a writer. It’s what makes it such a joy to be her editor. Sure enough, that’s exactly what she did, and so many early readers – in-house and out – say they love Malibu even more than Daisy.”

A selection of reviewer praise for MALIBU RISING:

Reserve Your Free Ticket for the n+1 Writers Awards Ceremony on Wednesday, May 26

This spring, n+1 established the Anthony Veasna So Fiction Prize, an annual $5,000 award granted to an outstanding fiction writer whose work has appeared in n+1…

In making her book club announcement, Jenna Hager Bush said, "I felt like MALIBU RISING was a compulsively fun read that anybody would want to throw…