THE STARLESS SEA: How Erin Morgenstern’s “Book About Books” Became a “Book About Stories” 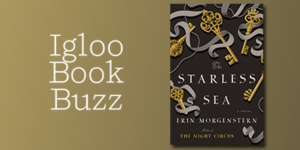 Our new Igloo Book Buzz selection is Erin Morgenstern’s THE STARLESS SEA, published by Doubleday on November 5. The New York Times bestselling author of THE NIGHT CIRCUS tells a timeless love story set in a secret underground world—a place of pirates, painters, lovers, liars, and ships that sail upon a starless sea.

Jennifer Jackson, VP & Senior Editor, Knopf Doubleday, says, “This has been my first time working with Erin Morgenstern and it’s hard to even describe how astonishing the process has been. She is so phenomenally imaginative. THE STARLESS SEA is a genre-bending dreamscape, steeped in mythology and lore with delights of imagination on every page. Zachary tastes an edible story—a mint that unfolds like a dream in his mouth. There are ice-sculptures that speak, bees the size of dogs, murderous ladies in fur coats, spies in coffee shops, key-collectors, men with owl heads, and more cats than a Murakami novel. It’s been a complete joy to publish this novel.”