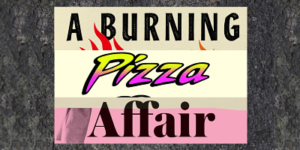 Megha Majumdar, author of A BURNING (Knopf), Jean Kyoung Frazier, author of PIZZA GIRL (Doubleday), and Sanaë Lemoine, author THE MARGO AFFAIR (Hogarth), will be in conversation with Kevin Nguyen at a “Burning Pizza Affair” virtual event hosted by Powerhouse Arena via Zoom on Thursday, July 16 at 7:00 pm (ET).

Bold, tender, propulsive, and unexpected in countless ways, Jean Kyoung Frazier’s PIZZA GIRL is a moving and funny portrait of a flawed, unforgettable young woman as she tries to find her place in the world.

Exposing the seams between private lives and public faces, THE MATGOT AFFAIR is a novel of deceit, desire, and transgression—and the exhilarating knife-edge upon which the danger of telling the truth outweighs the cost of keeping secrets.

Sanaë Lemoine was born in Paris to a Japanese mother and French father, and raised in France and Australia. She earned her undergraduate degree from the University of Pennsylvania and her MFA at Columbia University. She now lives in New York.

Mr. Nguyen is a One World author (NEW WAVES), the features editor at The Verge and was previously a senior editor at GQ. He lives in Brooklyn, New York.