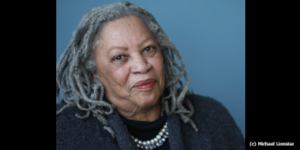 We are profoundly sad to report that Toni Morrison has died at the age of eighty-eight. She died last night at Montefiore Medical Center in New York.

The Bluest Eye, Morrison’s first novel, was published by Holt, Rinehart and Winston in 1970. Morrison followed with Sula in 1973, and nine subsequent novels, all of them published with Alfred A. Knopf.

Morrison’s novels were celebrated and embraced by booksellers, critics, educators, readers, and librarians. Her work also ignited controversy, notably in school districts that tried to ban her books. Few American writers won more awards for their books and writing. Morrison was awarded the Pulitzer Prize in 1988 for Beloved. In 1993, she was awarded the Nobel Prize in Literature, with the Swedish Academy recognizing her as an author “who in novels characterized by visionary force and poetic import, gives life to an essential aspect of American reality.” In 1996, she was honored with the National Book Foundation’s Medal of Distinguished Contribution to American Letters, and in 2012, President Barack Obama presented her with the Presidential Medal of Freedom.

Morrison also worked as an editor at Random House – the first female African-American editor in company history – from 1967 to 1983. There, she published Gayl Jones, Toni Cade Bambara, Henry Dumas, Huey P. Newton, Muhammad Ali, and Angela Davis, among others. Her work as an editor and publisher at Random House demonstrated a unique commitment to writers of color, and helped in opening industry doors to them.

And for over five decades, Morrison was also a part-time teacher of creative writing and literature, often bringing students together with other writers, at Howard University (from which she graduated in 1953), Yale University, SUNY Purchase, Bard College, Rutgers University, SUNY Albany, and Princeton University, where she retired as Robert F. Goheen Chair in the Humanities in 2006.

Many at Knopf and Random House came to know her as a valued colleague and dear friend.

The Morrison family issued this statement: “It is with profound sadness we share that, following a short illness, our adored mother and grandmother, Toni Morrison, passed away peacefully last night surrounded by family and friends. She was an extremely devoted mother, grandmother, and aunt who reveled in being with her family and friends. The consummate writer who treasured the written word, whether her own, her students or others, she read voraciously and was most at home when writing. Although her passing represents a tremendous loss, we are grateful she had a long, well lived life.

“While we would like to thank everyone who knew and loved her, personally or through her work, for their support at this difficult time, we ask for privacy as we mourn this loss to our family. We will share information in the near future about how we will celebrate Toni’s incredible life.”

Robert Gottlieb, Morrison’s longtime editor at Knopf, said: “She was a great woman and a great writer, and I don’t know which I will miss more.”

Sonny Mehta, Chairman of Knopf, said: “Toni Morrison’s working life was spent in the service of literature: writing books, reading books, editing books, teaching books. I can think of few writers in American letters who wrote with more humanity or with more love for language than Toni. Her narratives and mesmerizing prose have made an indelible mark on our culture. Her novels command and demand our attention. They are canonical works, and more importantly, they are books that remain beloved by readers.”

“A writer’s life and work are not a gift to mankind; they are its necessity.”

“If there’s a book you want to read, but it hasn’t been written yet, then you must write it.”

NONFICTION:
The Black Book, 1974
Playing in the Dark: Whiteness and the Literary Imagination, 1992
Race-ing Justice, En-gendering Power: Essays on Anita Hill, Clarence Thomas, and the Construction of Social Reality (editor), 1992
Remember: The Journey to School Integration, 2004
Burn This Book: PEN Writers Speak Out on the Power of the Word (editor), 2009
The Origin of Others, 2017
The Source of Self-Regard: Essays, Speeches, and Meditations, 2019