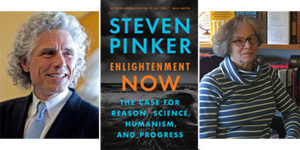 Steven Pinker’s ENLIGHTENMENT NOW: The Case for Reason, Science, Humanism and Progress,  acclaimed New York Times bestseller (debuting at #2) from Viking, is “the book of the moment” everyone is talking about, including avid reader Bill Gates: “The world is getting better, even if it doesn’t always feel that way. I’m glad we have brilliant thinkers like Steven Pinker to help us see the big picture.   ENLIGHTENMENT NOW is not only the best book Pinker’s ever written. It’s my new favorite book of all time.”

Professor of Psychology at Harvard University, cognitive scientist and public intellectual, Pinker urges everyone to step back from the gory headlines and prophecies of doom, which play to our psychological biases. He shows that life, health, prosperity, safety, peace, knowledge, and happiness are on the rise, not just in the West, but worldwide. This progress is not the result of some cosmic force. It is a gift of the Enlightenment: the conviction that reason and science can enhance human flourishing.

In this Three Questions for an Editor interview, Wendy Wolf, Vice President, Associate Publisher, Editorial Director Nonfiction, Viking, takes us inside the world of Pinker, their editor/author process, and the importance of ENLIGHTENMENT NOW.

When, how and why did you become the editor of Steven Pinker’s books? 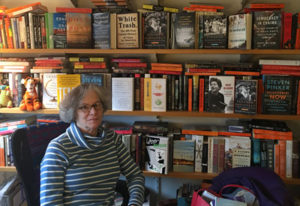 ENLIGHTENMENT NOW is our fifth book together. I became his editor around 2000, when Viking acquired The Blank Slate.  Steve was already well known for his work in language and psychology, but that book marked a turn for him, a broader inquiry into human nature.  I was immediately drawn to his provocative stance in the nature/nurture conversation, and to the breadth of evidence that he wanted to take in to make his argument. It became his first hardcover bestseller and was a finalist for the Pulitzer Prize, which was rewarding for a book of challenging intellectual ideas.

Since then, we’ve alternated between books about language (and writing) and books of about human nature and society.  The Sense of Style (in which I accused him of taking his revenge on all the copyeditors who’d fiddled with his grammar over the years) was a fun respite after The Better Angels of our Nature, a huge and ambitious tome about the history of violence.  Steve is obviously fiercely brilliant but he is also fearless when it comes to taking on controversial topics (intelligence, IQ, heredity, just for starts); and he tackles every topic with passion, from complicated neurology and deep philosophy to the finer points of constructing sentence trees. He and I have argued over everything from split personalities to split infinitives, but I always enjoy our editorial battles. He’s open to new ideas, and he has a great sense of humor and a useful fluency in popular culture. He works hard to get it right for every reader, not just his pointy-headed colleagues in the academic community.

Steve is also a lot of fun to publish because he’s such a good sport and game for almost anything including, most recently, doing a book interview on ice skates at Rockefeller Center (true fact).  He’s even enthusiastic about author tours. “I know it’s mandatory for authors to say they hate them,” he recently told me, “but if I spend two years writing a book, I sure want to tell people about it!” 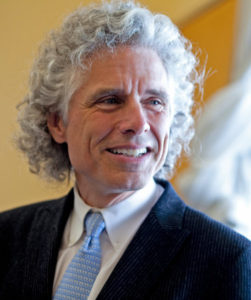 What was involved in the editor/author process as ENLIGHTENMENT NOW went from initial concept to its final form?

ENLIGHTENMENT NOW took several major leaps and turns from the book we originally planned. It was conceived as an outgrowth of a New Republic piece Steve wrote called “Science is not your Enemy,” and was meant to be a short polemic defending science’s contribution to civilization. As Steve began to follow the data, the book’s themes and parameters grew, and we wound up with many hundreds of pages of manuscript (and many charts and graphs) outlining the progress we had made in so many areas of human experience and the significant role that the Enlightenment virtues—reason, rationality, and humanism—had played in that progress. Then Trump happened.  The day after the election, Steve and I had a long talk about the challenges of publishing a book trumpeting the triumph of reason at such a frightening moment, and realized that now more than ever we needed to shine a light on the good news in the world (and there is plenty of it), and come up with a framework to help understand why it all seemed so dark, and specifically to track the origins of the tribalism that infects politics and society today.

Looking at the range of themes, values and questions addressed, why is this such an important book for our times and today’s readers?

This book is counterprograming to the gloom and doom in our current discourse (all across the political spectrum), but it’s no Polllyanna-ish dream of easy Utopia. Conquering disease, fighting illiteracy, defending human rights, saving children’s lives, eliminating war—these are all tough battles but we are winning them, but it’s not because of natural evolution or continental drift. The real drivers for progress are found in the law, in social programs that protect the vulnerable, in science that fights against climate change, and in books! World literacy turns out to be one of the biggest drivers of peace and justice.