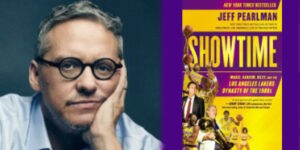 Jeff Pearlman’s SHOWTIME: Magic, Kareem, Riley, and the Lakers Dynasty of the 1980s, a New York Times bestseller published by Avery in 2014, has been adapted into an HBO series called Winning Time: The Rise of the Lakers Dynasty, scheduled to debut in March. The series cast includes John C. Reilly, Jason Clarke, Adrien Brody, Quincy Isaiah, Sally Field, and Jason Segel, among many others.

Jeff Pearlman was closely involved with the HBO production and comments, “The entire experience has been one of the most electrifying runs of my life. To see your book come to life, before you — it’s indescribably cool. I’ve been to set multiple times. I was given a cameo, as was my wife and our two kids. The attention to detail is unlike anything I’ve ever seen, and the appreciation and respect for the material in the book has been incredibly gratifying. This is my first time having something created from one of my books. It’s a dream come true.”

Reading Pearlman’s book and watching the HBO series, you will be immersed in the Los Angeles Lakers of the 1980s. This championship National Basketball Association team personified the flamboyance and excess of the decade over which they reigned. Beginning with the arrival of Earvin “Magic” Johnson as the #1 overall pick of the 1979 NBA draft, the Lakers played basketball with gusto and pizzazz, unleashing their famed “Showtime” run-and-gun style on a league unprepared for their speed and ferocity—and became the most captivating show in sports and, arguably, in all-around American entertainment. The Lakers’ roster overflowed with exciting all-star-caliber players, including center Kareem Abdul-Jabbar, and they were led by the incomparable Pat Riley, known for his slicked-back hair, his Armani suits, and his arrogant strut. Hollywood’s biggest celebrities lined the court. Best of all, the team was a winner. Between 1980 and 1991, the Lakers played in an unmatched nine NBA championship series, capturing five of them.

To watch the WINNING TIME trailer, click on the play arrow in the video window below.