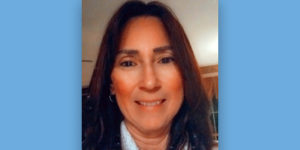 Bev Hood works in the Customer Service department at our Westminster distribution center and reached her 10-year anniversary in 2019. Her remarkable “Sabbatical Story” shows the importance of family and a supportive company such as Penguin Random House when a life challenge arises. Thank you for sharing, Bev.

Like many of my colleagues, I started making plans early for my first sabbatical. I organized a 16-day vacation to Alaska and it was going to be the trip of a lifetime. My husband and I were so excited – what a way to celebrate 35 years of marriage! We’d even convinced six close friends to join us. The trip was set for mid-August and we’d return home just in time for my son’s wedding in September. But on July 28th, life threw me a curve ball and everything changed.

Our 30-year-old daughter, Britni, became sick with no warning. Before that day, she was a healthy, vibrant, hardworking, independent, single woman who was working two jobs to support herself and her 12-year-old daughter. At first, no one, not even the ER doctors, realized what was wrong with her. Over the next six weeks my daughter was seen at four different hospitals, rode in three ambulances, was twice airlifted back to the hospital (once from my front yard), had three surgeries and ultimately spent a total of 35 days in the hospital. Her condition was very critical during most of her stay.

My daughter Britni was diagnosed with a rare vessel disorder, Fibromuscular Dysplasia, which caused a dissection of the Carotid Artery. This led to several strokes, the first one happened on that day in July. She later developed bleeding and swelling of the brain and also had a seizure. The strokes and brain damage caused her to have Aphasia which is a communication disorder that requires extensive speech therapy. (Have you needed to Google anything yet?)

We are incredibly blessed to live 50 miles away from Johns Hopkins, one of the top stroke hospitals in the country. This became our new temporary home during the summer. Britni, and our granddaughter Karlie, moved back home with us temporarily so that I can help with their daily needs. During the past three months, we have had so many people praying for her and we definitely felt those prayers! She was paralyzed on her right side just eight weeks ago and today is able to walk and even run with no problem. Six weeks ago, she was unable to identify family members and was unable to name most objects, yet today she has improved so much, that even her speech therapist is amazed! At this point, we’re optimistic that she’ll recover, hopeful that it will be 100%, but there are no guarantees.

At the Wedding of Bev Hood’s son: (left to right) Andy (Bev’s husband), Bev, Britni, Tyler (her brother), Carmela (his new wife), Corey (her brother) and Karlie (her daughter)

We are hopeful that in time, Britni will be able to return to her home and back to her to her job as a Middle School Special Education Teacher. We are blessed that she survived and is making small steps of improvement daily. You truly realize what’s important in life when something like this happens.

So my sabbatical story? It changed quite a bit from those plans that I’d originally made. Instead, I was able to use my four weeks to tend to my daughters’ needs and also be a temporary “mom” to my granddaughter. I’ve become their favorite chauffeur and I was able to spend quality time with them. My granddaughter recently turned 13 so I’m getting back in the swing of parenting a teenager, heaven help me. Receiving an extra four weeks of paid time off came precisely when I needed it! My managers’ were so incredibly kind by allowing me to change the dates of my sabbatical to suit my family’s needs.

Our trip to Alaska? Yes, we had cancellation insurance! Our group of friends still went without us and had perfect weather, the trip was incredible. Not sure if my husband and I will ever get to Alaska, but who knows, maybe in ten years we’ll try it again. And our sons’ wedding? Britni made it home for that special day and what a celebration we had! If you will, please say a little prayer for Britni, we’re asking for a complete and unexplainable healing. Thanks Penguin Random House, you are an awesome and amazing company to work for! #dontstopbelieving #onedayatatime