William Gibson Unravels the Creation of His New Novel AGENCY 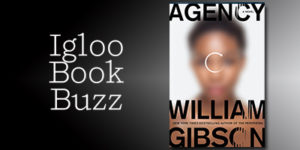 Our new Igloo Book Buzz selection is William Gibson’s AGENCY, published by Berkley. Gibson has trained his eye on the future for decades, ever since coining the term “cyberspace” and then popularizing it in his classic speculative novel Neuromancer in the early 1980s. His new science fiction thriller is heavily influenced by our most current events. Gibson recently spoke to The Guardian about the evolution of the book’s plot:

“I woke up the day after [Trump was elected President] and I looked at the manuscript and the world in which the novel was set – a contemporary novel set in San Francisco – and I realized that that world no longer existed. That the characters’ emotional basis made no sense; that no one’s behavior made any sense. Something of this tremendous enormity had just happened and I felt really lost – and sort of mournful. I was losing this book.

“I thought, you know, this is never going to happen. And it really threw me – for about six months. All I could do was read the news feed and feel worse about that. But eventually I realized that I wanted to believe I was living in a stub. That something had split off and that things weren’t supposed to be this way. It wasn’t supposed to be as dire. And having had that passing thought, I thought – wait a minute! [AGENCY character] Verity [Jane] is in a stub. And suddenly it worked. I had a framework that was coming together.”

“My specific time travel gimmick in these books,” Gibson continues, “is that it’s impossible to physically visit the past, so you have to do it digitally. But immediately on contacting the past you create a stub, because that contact didn’t happen in your past so you create an alternate history. And that spares me all of that tedious paradoxical stuff that bogs down time travel stories.

“AGENCY is a sort of connector. It’s universal because it’s designed to cope with anything – whatever is happening in the next few years short of complete nuclear destruction – in which case it won’t matter. For me it’s open-ended in a lot of ways so I’m hoping that what I’ve designed will prevent me from having a repeat of that experience I had on November 9, [2016]. That’s what I’ve been trying to build.”

Berkley Senior Editor Jessica Wade says, “It’s a deep pleasure working with an author who has such a talent for both wild, fascinating extrapolation into our possible futures and constantly surprising, nuanced insight into our tumultuous present. I’m really excited for readers to get their hands on William Gibson’s first novel since 2014, and from the very enthusiastic buzz around the book, I know they are too.”