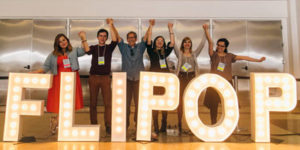 Like many countries around the world, Brazil has seen a surge in young adult literature. Young readers flock to every book festival, treat their favorite authors like rock stars, and form huge communities online. It seemed like a missed opportunity that there wasn’t a festival focused on them in our country. Organizers that invited YA authors didn’t really know what to do with crowds that were willing to sleep overnight to secure a place in line to get an autograph. 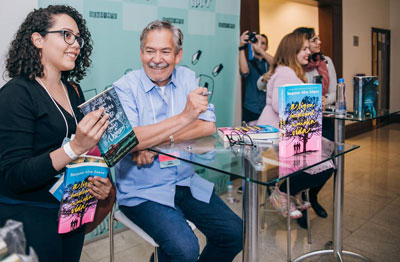 Instead of waiting for someone else to solve this issue, we decided to take matters into our own hands. We observed local festivals and researched conventions abroad, such as LeakyCon, YALLFest and Yalc. In 2017, we finally felt ready to announce FLIPOP (Pop Literature Festival), a two-day event with international writers (Alwyn Hamilton and Benjamin Alire Sáenz) and fourteen Brazilian authors. The event, which took place in July, consisted of eight panels focused on such topics as global community building, diversity in literature, favorite (and least favorite) clichés, tips for new writers, and the power of digital influencers. One visitor won a whole year of Seguinte’s releases and everyone took home Eco bags, bookmarks, and buttons. The festival ended with the Selection Ball, a dance party for all attendees. Click here to watch a video about the event.

When we announced the FLIPOP, we thought our main challenge would be getting people to understand this new format, which was closer to a convention than the book fairs with which readers are accustomed. However, as soon as we announced FLIPOP, there was an immediate reaction among readers along the lines of “Why has there never been something like this before?” Tickets gave access to both days, and all 350 of them sold out in two weeks. Marketing was done solely through our social media channels, and 26 percent of attendees came from other cities, just for the festival, and 12 percent even flew in from other states. 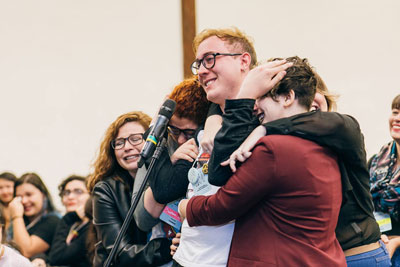 During FLIPOP, we received a lot of feedback from people, who thanked us for providing a place where they felt a true sense of belonging. Both authors and readers said they enjoyed the deeper conversations that the panels provided. “What I loved about this festival is that we could all enjoy it together. Authors and readers—there’s a bit of this in every one of us—were able to connect through this passion we share. I am waiting for next year’s FLIPOP. If it was up to me, we could have one every weekend!” said Iris Figueiredo, author of Céu Sem Estrelas.

Since the event, we have been frequently asked, “When is there going to be another FLIPOP?” Other publishing houses have already contacted us asking to be a part of it. Now that we’ve set the example and showed that it can be successful, we’re already full of ideas to make FLIPOP 2018 a bigger and even better event for our young readers.

To stay up-to-date on publishing news from Seguinte, visit:  www.editoraseguinte.com.br