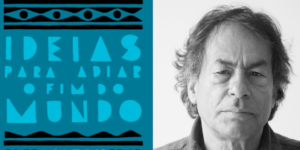 About IDEIAS PARA ADIAR O FIM DO MUNDO by Ailton Krenak: In this book, indigenous leader Ailton Krenak criticizes the idea of humanity as apart from nature, of a “humanity that doesn’t recognize that this comatose river is also our grandfather.” This premise would be the starting point for the socio-environmental disaster of this era, the Anthropocene. Thus, indigenous resistance shouldn’t be based on accepting the idea that we are all the same. Only by recognizing diversity and refusing the idea of humans as superior to other beings can we give our existence new meanings and reframe our foolish march toward the abyss.

Why do you believe this title is so popular with readers?
Although Brazilian territory is home for hundreds of different indigenous societies, a cultural diversity asset with little parallel in the world, the country´s culture industry is very little touched by this multiplicity. The book market, particularly, has not been active in publishing indigenous thinkers and indigenous literature—with some honorable exceptions, especially at Companhia das Letras. A strong indigenous author, published by an important publishing house, therefore, was something that immediately struck Brazilian readership. Krenak is a unique storyteller and speaker, a very intelligent and charismatic person, and his decolonial writing is at the same time original, sophisticated, and crystal clear. But more than anything, the book’s title offers a strong and direct message connected to our Zeitgeist. In a time of climate change, crisis of democracy, and, more recently, the COVID-19 pandemic, it became urgent to hear this brilliant indigenous leader talking about his “ideas to postpone the end of the world.” He reminds us that indigenous peoples have been dealing with “the end of the world” since the European invasion of the continent, in the 1500s—therefore, they became specialists in dealing with it.

When and how did the idea for this book come about?
I’ve been a great admirer of Krenak since his unforgettable speech in the 1987 Constituent Assembly, when he painted his face genipap black to protest the setbacks on the fight for indigenous rights. In early 2018, when talking with my friend Rita Carelli, whose father was a very important documentarist working with indigenous peoples for decades, she mentioned that Krenak had recently given a talk entitled “Ideas to postpone the end of the world.” Carelli arranged a meeting with Krenak and I proposed him to publish a short book with edited versions of this and two other recent talks. We worked quickly, the Companhia team was very committed to the project, and the book was ready within a couple of months in order to be launched at the Paraty Book Festival (FLIP, in July, for which he had been invited even before the book deal was signed.

What was special about this marketing campaign and how did it differ from traditional campaigns? How was the launch impacted by the pandemic?
Krenak is a great speaker. Before the pandemic, he was already invited to give talks all over the country and those have multiplied since March. He became one of the most demanded thinkers in the country and has been giving interviews and making Instagram lives several times per week, engaging more and more readers to his books. The launching event of his new book that happened during the pandemic, “A vida não é útil,” was one of the most-watched lives that we had on Companhia das Letras’ YouTube, and we took that opportunity to promote the book on our social media, podcasts, Google Ads, TV appearances, and other online interviews for different media outlets.