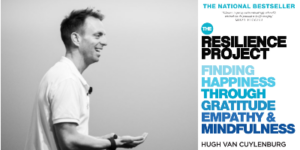 About THE RESILIENCE PROJECT by Hugh van Cuylenburg: Hugh van Cuylenburg was a primary school teacher volunteering in northern India when he had a life-changing realisation: despite the underprivileged community the children were from, they were remarkably positive. By contrast, back in Australia Hugh knew that all too many people found it hard to be happy, or suffered from mental illnesses such as depression and anxiety. He set about analysing what key traits and behaviours these children possessed, and discovered they were gratitude, empathy and mindfulness. In THE RESILIENCE PROJECT he shares how we can all live a happier and more meaningful life by following their example. 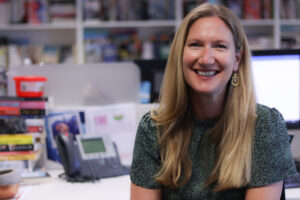 Why do you believe this title is so popular with readers?
The book has life sales of over 75,000 in physical format and 50,000 in audio. It came out in December 2019, when Australia was experiencing the worst bushfires on record and had endured a devastating drought. Given the book’s focus, it couldn’t have been more timely – and we were unaware then that we would soon face floods and a global pandemic.

The interesting thing about THE RESILIENCE PROJECT is that it appeals to non-readers. Many people have commented that they rarely pick up a book yet managed to read THE RESILIENCE PROJECT in a day. Hugh’s simple narrative style, using storytelling as a vehicle for discussing mental health issues, may be part of the appeal, along with his great charm and self-deprecating humour. Certainly the inclusion of sports celebrities’ stories about their struggles with depression and anxiety helped to broaden the readership.

When and how did the idea for this book come about?
Our Head of Culture and Development, Sue Stone, went to see Hugh give a talk earlier in the year and then sent a group of staff to see him speak at one of his events. I approached Hugh afterwards and asked if he was interested in writing a book. He politely said no! Fortunately, he warmed to the idea, particularly after bonding with his easygoing ghostwriter who conducted interviews whenever Hugh had a rare spare moment, even out surfing together. Editor Tom Langshaw and I then rapidly put the book together in six weeks – on dry land.

What was special about this marketing campaign and how did it differ from traditional campaigns? How was the launch impacted by the pandemic?
Hugh pivoted to giving online talks during the pandemic and the book became a focus title for the Driving Online Sales group. We doubled down on our marketing and promotional efforts, keeping the book in stock and front of mind with retailers throughout the year. We ran podcast advertising that Hugh recorded for us, and ran more digital display advertising targeting wellbeing and self-help.

On the audio front, the title was featured in our Love Audio, Love Penguin promotion with Apple. It was promoted via digital banner advertising on PRH Facebook and Instagram channels and in our Read More newsletter.

The audiobook was also featured in Audible’s ‘Best Australian Audiobooks of All Time’ campaign. It’s now our biggest-selling local audiobook to date and Book 2 is due out in December 2021.