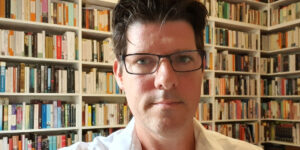 I work on non-illustrated books about politics, history, biography, sport, and personal finance. My main role is to shepherd projects from manuscript delivery to print, although I also get involved before and after the editorial stage. I work with in-house and freelance editors, proofreaders, designers, typesetters, indexers, and lawyers. 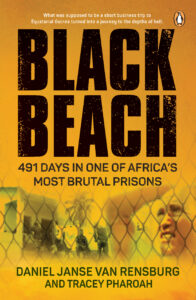 One of the books I worked on this year was BLACK BEACH: 491 DAYS IN ONE OF AFRICA’S MOST BRUTAL PRISONS. It’s the extraordinary story of Daniel Janse van Rensburg, a South African businessman who sourced aeroplanes for a politician in Equatorial Guinea off the west coast of Africa; a deal that went very, very sour. On a trip to the country’s island capital, Malabo, the politician declared to Daniel that the deal was off, and that he wanted his money back. Daniel couldn’t pay it back because he’d spent it on aircraft, licensing, and other costs. He was promptly arrested and thrown into the notorious Black Beach prison. The book, ghostwritten by Tracey Pharoah, is Daniel’s harrowing but inspiring account of how he survived 491 days in that brutal place.

The original manuscript was a formidable 148,000 words long, so my first step was to make suggestions on where cuts could be made. The authors managed to reduce it to a more manageable 115,000 words.

The book is told in Daniel’s voice, and is written in the present tense, which gives it a thrilling immediacy, but also provided editorial challenges in how to handle the passing of time, what to do with statements about future events, and how to sequence short-term event-based chapters versus longer-term, thematic ones. On top of that, Daniel’s memory of events was not always perfectly clear, as a result of the trauma he experienced in prison. We had to look out for internal inconsistencies, as well as external evidence for the order in which events occurred. One of my in-house editors, Alice Inggs, did a sterling editing job.

Many of our books require a legal read, and our lawyers advised us how to rephrase certain passages to minimise the legal risk. This involved some toing and froing with the authors and lawyers.

The cover was created by our designer Ryan Africa, using an image of Daniel in prison that a visitor had surreptitiously taken with a watch camera. It was a very low-res image that required a lot of work, but which formed the basis of two powerful cover options. I oversaw a fairly spirited cover approval process (one of the challenging aspects of a managing editor’s job!), with opinion firmly divided among our CEO, sales, and marketing managers, and even between the author and ghostwriter. We have a fine back-up option if we ever translate the book!

Lastly, we decided to intersperse the text with letters and sketches that Daniel made in prison, which gave the book additional authenticity. It also provided some late clues about the precise chronology of events, and required my typesetter to shift a couple of chapters around.

The final result is a powerful book that I’m proud to have worked on, and which I hope reaches a wide audience.