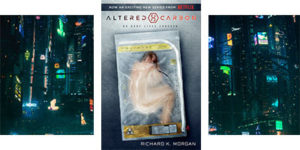 The cinematic scope of Richard K. Morgan’s genre-bending science fiction book, ALTERED CARBON (Del Rey), made it a natural for screen adaptation.  Now streaming exclusively on Netflix, this ten-episode series takes place more than 350 years into the future, when humankind has spread throughout the galaxy, monitored by the watchful eye of the U.N.  While divisions in race, religion, and class still exist, advances in technology have redefined life itself. Now, assuming one can afford the expensive procedure, a person’s consciousness can be stored in a cortical stack at the base of the brain and easily downloaded into a new body (or “sleeve”) making death nothing more than a minor blip on a screen.

expand
Brought back to life after 250 years by Laurens Bancroft (James Purefoy), the richest man on Earth, ex-Envoy soldier Takeshi Kovacs (Joel Kinnaman / Will Yun Lee) must solve Bancroft's attempted murder for the chance to live again in a world he doesn't recognize. In 2003, ALTERED CARBON won the Philip K. Dick Award, was a New York Times notable book, and made that year's Best lists for The New York Times, Library Journal, and Locus Magazine, among others. There are also two more books in the series that take place after ALTERED CARBON: BROKEN ANGELS and WOKEN FURIES. Morgan’s next standalone novel, THIN AIR, will be released on July 31. Watch the ALTERED CARBON Netflix series trailer: https://www.youtube.com/watch?v=dhFM8akm9a4 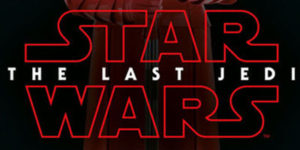 The legion of Star Wars fans can rejoice. Not only does The Last Jedi movie premiere, at last, this weekend, but our DK Publishing and Ballantine/Del Rey/Lucas Books imprints are releasing a raft of new specially created tie-in books with Lucasfilm Ltd. to enjoy before and long after their attendance.

STAR WARS: The Last Jedi: The Visual Dictionary  by Pablo Hidalgo (DK, 12/15) This definitive guide to Star Wars: The Last Jedi introduces the characters, creatures, droids, locations, and technology from the new film. Packed with 100+ images and information as penned by Star Wars scribe Pablo Hidalgo, who helps ensure consistency across a wide array of Star Wars projects, it’s a must-have for all fans who want to go beyond the movie experience. Pablo has written several DK titles, including STAR WARS: Rogue One: The Ultimate Guide.

STAR WARS: The Last Jedi: Incredible Cross-Sections by Jason Fry, illustrated by Kemp Remillard (DK, 12/15) STAR WARS: The Last Jedi: Incredible Cross-Sections goes inside—literally—to show the inner workings of 13 vehicles from the movie. Each vehicle is illustrated in full-color by famed artist Kemp Remillard, complete with callouts by author Jason Fry to all the pertinent features of each ship. Accompanying comprehensive text make this one of the best reference guides for the new craft in the Star Wars galaxy.

STAR WARS: CANTO BIGHT – Journey to Star Wars: The Last Jedi by Saladin Ahmed, Rae Carson, Mira Grant and John Jackson Miller (Del Rey, 12/5) Soon to be seen in Star Wars: The Last Jedi, welcome to the casino city of Canto Bight. A place where exotic aliens, captivating creatures, and other would-be high rollers are willing to risk everything to make their fortunes. Set across one fateful evening, these four interconnected stories explore the deception and danger of the lavish casino city.  In Canto Bight, one is free to revel in excess, untouched from the problems of a galaxy once again descending into chaos and war. Dreams can become reality, but the stakes have never been higher—for there is a darkness obscured by all the glamour and luxury.

STAR WARS: PHASMA – Journey to Star Wars: The Last Jedi  by Delilah S. Dawson (Del Rey, 9/1) Discover Captain Phasma’s mysterious history in this “Journey to Star Wars: The Last Jedi” novel. One of the most cunning and merciless officers of the First Order, Captain Phasma commands the favor of her superiors, the respect of her peers, and the terror of her enemies. But for all her renown, Phasma remains as virtually unknown as the impassive expression on her gleaming chrome helmet. Now, an adversary is bent on unearthing her mysterious origins—and exposing a secret she guards as zealously and ruthlessly as she serves her masters. 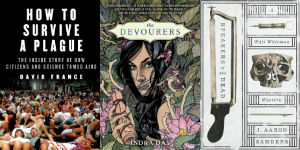 HOW TO SURVIVE A PLAGUE: The Inside Story of How Citizens and Science Tamed AIDS by David France, (Alfred A. Knopf) LGBT Science Fiction / Fantasy/ Horror THE DEVOURERS by Indra Das (Del Rey) Gay Mystery SPEAKERS OF THE DEAD: A Walt Whitman Mystery by J. Aaron Sanders (Plume) Visionary Award 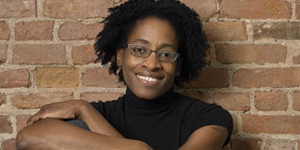 Jacqueline Woodson, author of such acclaimed books as the National Book Award-winning BROWN GIRL DREAMING (Nancy Paulsen Books/Puffin), received the Visionary Award for “breaking new ground in the field of LGBT literature.” Tony Award-winning actress Cynthia Nixon introduced Woodson as a “writer who is part of the institution but stands outside it and critiques.” Congratulations to our award-winning authors, editors and publishers. View the complete list of 2017 Lambda Literary Awards winners here.

With the number of great books that we are bringing every month, it also becomes very important to understand how we efficiently use our resources to…