#1 New York Times and Internationally Bestselling Author of THE BOOK THIEF, Markus Zusak, to Publish His Eagerly Awaited Next Novel, BRIDGE OF CLAY, This Fall

BRIDGE OF CLAY, the highly anticipated novel by internationally bestselling and award-winning author Markus Zusak, will be published this Fall, it was announced globally today. On sale October 9, 2018, the book will release with a first printing of 500,000 copies in the U.S., and be published by Alfred A. Knopf, home of Zusak’s THE BOOK THIEF. It will publish simultaneously in Zusak’s native Australia, and in the U.K. two days later. BRIDGE OF CLAY will be edited in the U.S. by Zusak’s longtime editor Erin Clarke. Catherine Drayton of Inkwell Management represents Zusak. 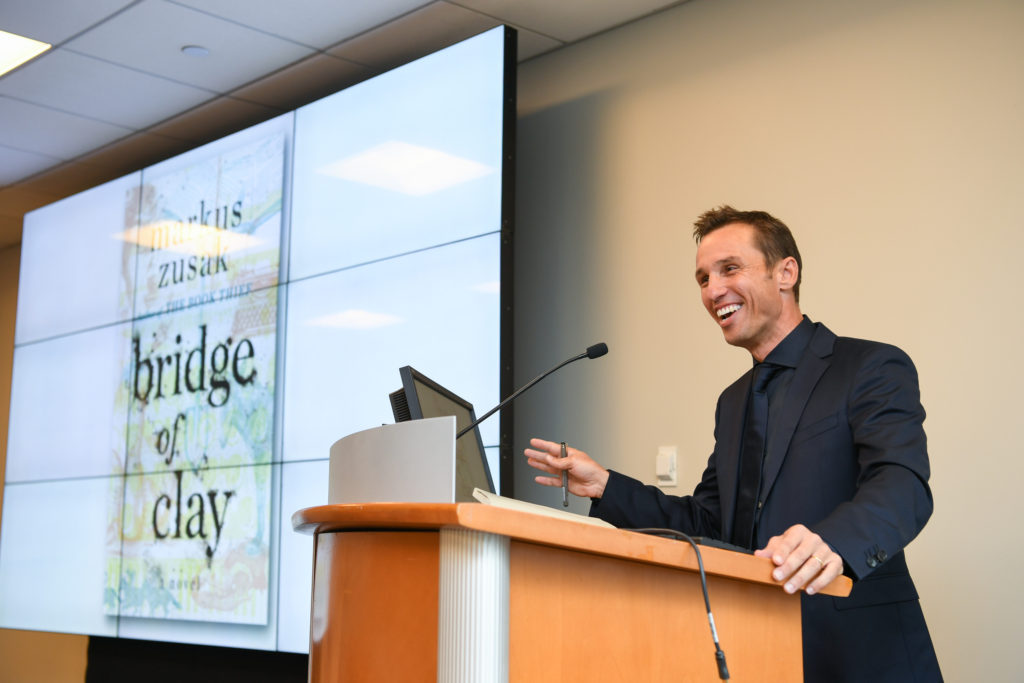 Markus Zusak, in a surprise visit from Australia, presents BRIDGE OF CLAY in-person to the Random House Children’s Books Sales Force[/caption] From the author whose beloved novel THE BOOK THIEF has spent over 500 weeks on the New York Times bestseller list comes BRIDGE OF CLAY, a sweeping family saga chronicling the lives of five brothers who bring each other up in a world run on their own rules. As the Dunbar boys love and fight and learn to reckon with the adult world, they discover the moving secret behind their father’s disappearance. At the center of the Dunbar family is Clay, a boy who will build a bridge—for his family, for his past, for greatness, for his sins, for a miracle. A major marketing and publicity campaign will support this landmark publication, featuring a 12-city U.S. author tour and an extensive book club promotion connecting Zusak to groups nationwide selected from a special sweepstakes launching this summer. 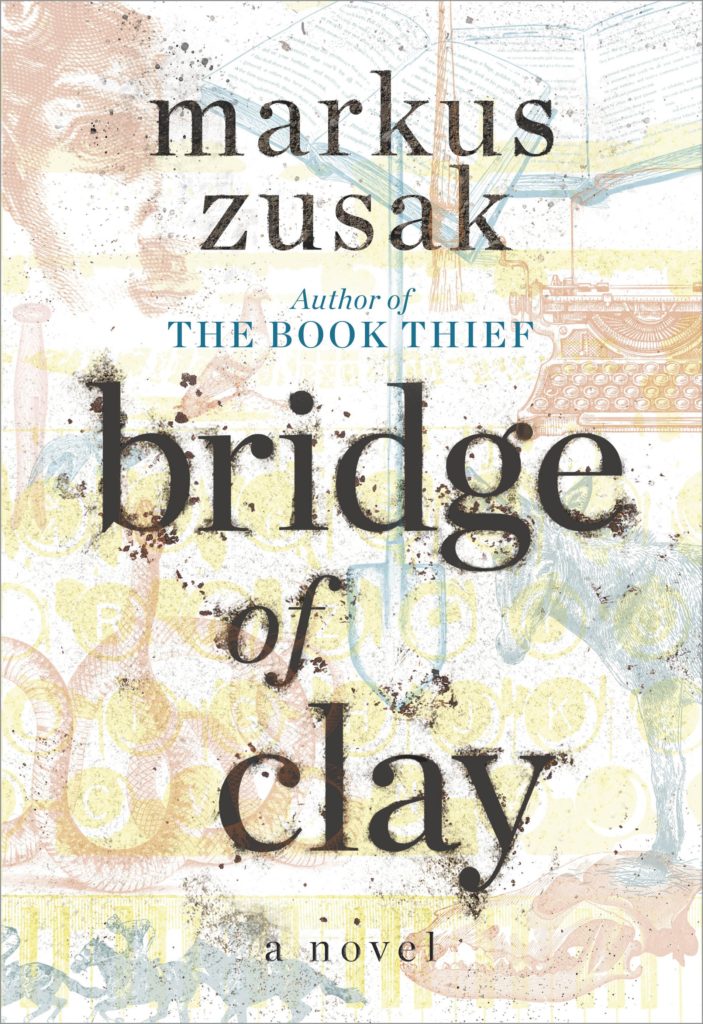 Zusak will sign a portion of the first print run, and the signed editions will be available for purchase from participating retailers, while supplies last. “Thirteen years is probably long enough between books, but BRIDGE OF CLAY was never meant to be easy. It’s a boy in search of a miracle, and that’s how I feel about finishing,” says Zusak. “Every book we write means something to us, but sometimes it comes to mean everything—and BRIDGE OF CLAY, for me, is that latter type: the book you have to fight for, but is all the more rewarding. I hope readers will enjoy spending time with the Dunbar boys, and all their raucous habits—but it’s Clay I feel for most, and his attempt to build that bridge of his, and find a way back home.” “Like its predecessor THE BOOK THIEF, Markus’s new book has a broad literary appeal that defies categorization,” says Clarke. “An epic family saga, told in beautifully inventive language and bursting with heart, BRIDGE OF CLAY is signature Zusak.” BRIDGE OF CLAY will be published in hardcover and ebook, and will be available as an audiobook from Listening Library in both download and CD formats. [caption id="attachment_9943" align="alignright" width="422"] 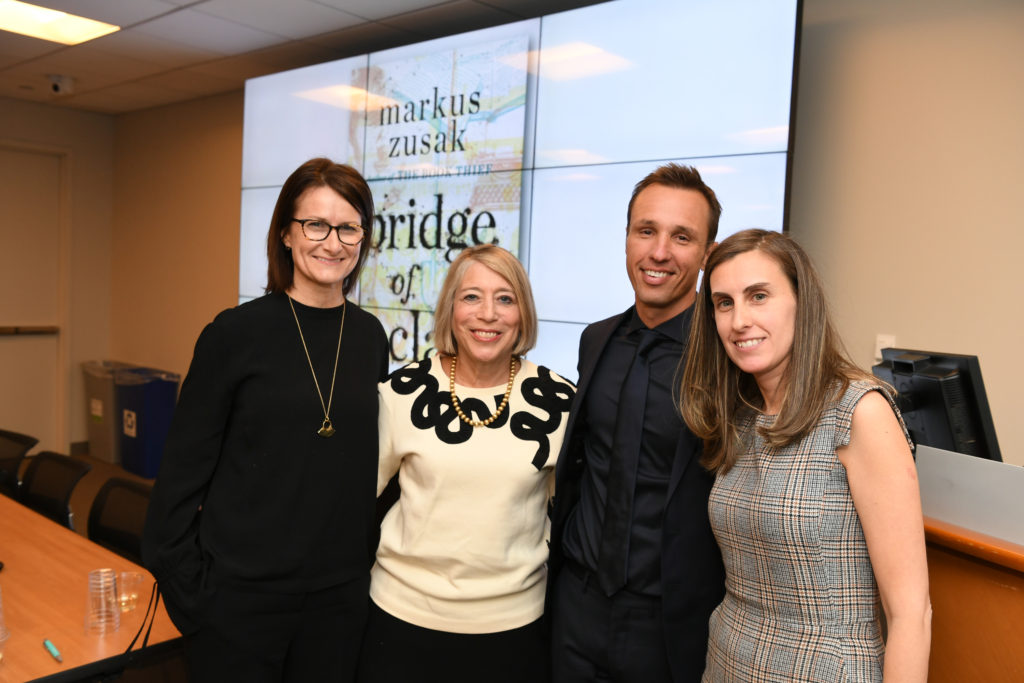 (left to right) Judith Haut, SVP & Associate Publisher, RHCB; Barbara Marcus, President & Publisher, RHCB; Markus Zusak; Erin Clarke, Executive Editor, Knopf BFYR[/caption] Zusak is best known for his extraordinarily novel THE BOOK THIEF, which has sold 16 million copies worldwide, is published in 42 foreign language territories, and has spent over 500 weeks on the New York Times bestseller list. Originally published in March 2006, the novel received glowing praise and numerous awards, including a Michael L. Printz Honor from the American Library Association and the Sydney Taylor Book Award from the Association of Jewish Libraries. THE BOOK THIEF has since gone on to become a book selection of community reads programs across the country and was released as a major motion picture in 2013. Zusak’s other internationally bestselling works include I Am the Messenger, a Printz Honor Book and Los Angeles Times Book Prize Finalist; The Underdog; Fighting Ruben Wolfe; and Getting the Girl. Zusak lives in Sydney, Australia, with his wife and children. Markus is available for select appearances via the Penguin Random House Speakers Bureau. Follow Markus on Facebook/MarkusZusak and Instagram @markuszusak.