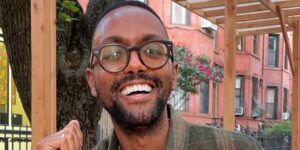 Everyone has unique career stories to tell. In our Igloo series, My Path to Penguin Random House, PRH colleagues share how they entered the world of book publishing, what led them to our company, insights into their jobs, and their future professional aspirations.

How would you describe the course of your path to book publishing, including prior practical, professional, and educational experiences? 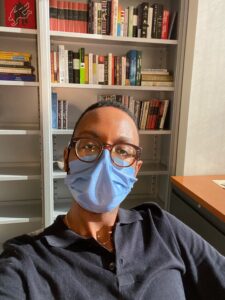 Thomas in his office at 1745 Broadway.

My parents emigrated from Eritrea in the mid-1980s. In our house, Tigrinya was the spoken language. (My mother likes to say that English was my second language.) Because of their experiences as immigrants—some good, some very bad—my parents placed a lot of value on the importance, and power, of language. So, as a child, I spent a lot of time perusing the stacks at one of the many branches of the Columbus Public Library or getting lost in the 32-roomed bookstore The Book Loft downtown. I started with YA and worked my up to “adult” fiction: Lynda Barry, Elizabeth Gaskell, Toni Morrison. The summer I was fifteen, a friend and I delved into Russian literature—War and Peace, Anna Karenina, and The Brothers Karamazov. I lived a thousand different lives in reading just those three books.

So, I always suspected I would end up working with words. I took a creative writing elective in college and, a few months after graduation, enrolled at the Iowa Writers’ Workshop, where I earned an MFA in fiction writing. It was a great experience, but I knew that, in the end, I wanted—and needed—a proper 9-5. I landed an interview at Vogue. Fortunately, I was able to crash in the spare bedroom of a friend. I got the job and moved into a shared four-bedroom apartment in Bushwick (I used the prize money for a short story contest I’d won at Iowa for my first month’s rent). I say all of this to illustrate just how challenging it can be to break into books if even one door remains closed. I got here not only because of skill and passion, but also, and maybe more importantly, because of luck.

In what ways did your journalism career and wide-ranging knowledge of pop culture impact your decision to become a book editor? 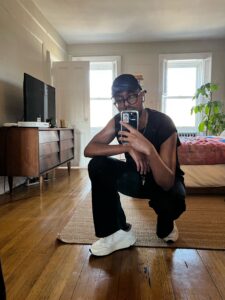 Being lively and fun.

I joined Doubleday in September of 2020. Previously, apart from a stint as Crown at Tim Duggan Books, I’d worked in magazines: at Vogue, The Wall Street Journal Magazine, and, most recently, The Atlantic, where I edited longform reportage, criticism, and essays, as well as fiction. But Doubleday came calling and, after some handwringing, I decided to make the leap to books, which were my first love. As much as I enjoyed working in magazines—especially The Atlantic, which did a stellar job of covering the previous administration and the start of the pandemic—I longed to explore many of the subjects that were of interest to me in greater depth. In magazines, there is always a word limit. I also cherished collaborating with writers and could think of no greater joy than spending even more time with each one of them doing just that. One thing that has remained constant is my goal of recognizing the people and perspectives that often go overlooked, and that, along with my taste, of course, informs my decisions about which books to acquire. I want to add value to the literary ecosystem.

What attracted you to Crown, and then Doubleday, and what have been some of the highlights of working at PRH so far?

Frankly, I loathed the culture at Vogue, though many of my best friends to this day are those I met at the magazine. After about a year and a half there, I was ready to jump ship, and the opportunity to work at Crown felt like a life raft. The job, it turned out, was also a fantastic apprenticeship. At the time, Tim Duggan was starting his namesake imprint, and he was an exceptional boss who ensured that I was present at every table, so I was deeply involved—and invested—at every stage of the making of his books.

Several years later, I found I could not easily pass up an offer to come to Doubleday. I already knew I loved their (our!) books, but I did some additional research that further confirmed my admiration for the imprint: I heard wonderful things about my boss, Bill Thomas, and how he was committed to maintaining a pleasant work environment for his employees; I also learned that he’d done away with an acquisitions board, which is still a common fixture at other houses. As we know, the kinds of conversations that happen at these meetings can make even the most starry-eyed reader jaded (who cares if the author goes by Katie instead of Katherine?). At Doubleday, book-buying decisions come down to a conversation between the editor and Bill. It’s a far less cynical—and more romantic—process, and that was a major selling point for me. I also already had connections at Doubleday, having partnered with my now colleagues on books coverage at WSJ and The Atlantic.

How do you view the future, in terms of personal aspirations and career goals?

The list I’ve built thus far is one that, I hope, speaks to my eclecticism: it has memoir, science history, criticism, fiction. And I hope to continue to add titles that present radical, new ideas, or else reframe or reintroduce readers to familiar ones. As Doubleday author Margaret Atwood once said, “A word after a word after a word is power.” I want to empower writers and readers. And, for what it’s worth, I think Atwood stole that line from my parents.

Attention PRH colleagues: If you are interested in participating in the My Path to Penguin Random House series or have someone to nominate, please email igloo@penguinrandomhouse.com.

How would you describe the course of your path to book publishing, including prior practical, professional, and educational experiences? My parents emigrated from Eritrea in the…