My Path to PRH: Matt Schwartz on Playing a Game Where the Rules Change Everyday 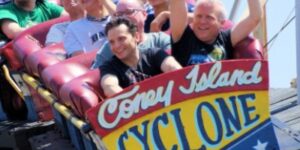 Matt and his brother on Coney Island Cyclone.

Everyone has unique career stories to tell.  In our My Path to Penguin Random House series, PRH colleagues share how they entered the world of book publishing, what led them to our company, insights into their jobs, and their future professional aspirations.

This week, we’re featuring Matt Schwartz, Senior Vice President, Director of Digital Strategy, Random House Group, as he tells us his story in his own words.

How would you describe the course of your path to book publishing and PRH, including practical, professional, and educational? 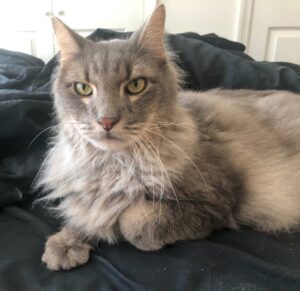 Henry, one of Matt’s cats.

Well, my path to publishing has been an unusual one. In the ‘90s I dropped out of law school and fell into a series of entry-level media and marketing positions. In order to help make ends meet, I also worked in a bar at nights – sometimes working in the office from 8AM to 5PM and then in the bar from 9PM to 3AM. I was always a huge reader, especially of horror fiction, but I was completely broke and couldn’t afford to buy many of the books I wanted, in particular a lot of cutting-edge fiction coming out of small presses. So in my spare time, I taught myself some very basic HTML (thank you Microsoft Front Page!) and then proceeded to contact several dozen horror authors and small presses, offering to give them free simple webpages promoting them or their books in exchange for free books.Surprisingly, the response was pretty overwhelming. Many genre top small presses (Cemetery Dance, Subterranean Press) took me up on my offer, as well as many authors, including George R. R. Martin (prior to A GAME OF THRONES becoming a phenomenon). Ultimately, I created an online hub for all of these sites to make it easy for fans to browse them all, and then I added very early forum software allowing some authors to interact directly with fans. I also dove into the science fiction and horror convention community, giving me a lot more access to authors directly.Unbeknownst to me, Barnes and Noble was starting their website and looking for people to help get it off the ground, and they contacted me about coming to work for them as an editor for their genre category content. From there, I became the site’s editorial director, and then spent another decade moving around, including a couple of e-commerce gigs focusing on comic books and graphic novels and running my own online horror bookstore, Shocklines, for years before being approached by Simon & Schuster to do digital marketing for them.

After a short time there, I jumped to Random House, where it took me a few years to really find my place and carve out a job using my prior experience of looking at consumer behavior on ecommerce sites, as well as generating online buzz and awareness with minimal spending.

When coming up with a digital strategy, what are some of the main aspects you take into consideration?

Most of my team’s time is spent studying our online retailer partners and figuring out the best ways to optimize our online sales – whether that’s through discoverability or increasing the likelihood that someone purchases the book once they land on the product page. What makes the job interesting is that these retailer sites are changing their algorithms and design all the time, forcing us to pivot our best practices and adapt quickly. A lot of what occurs at online retailers is out of our control – so it can be a bit stressful when trying to find a creative solution to a problem we didn’t create. It’s like playing a game where the rules are changing every day.

What have been some of the highlights of your PRH job and work life so far? Has anything surprised you? 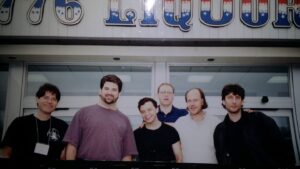 The highlights have been the wonderful people I get to work with every day. My job allows me to interact with people in every department in our division as well as countless people in the corporate groups and also other publishing divisions, and I love it. I’ve had many, many jobs in my life, and this is the first time I’ve stayed with a company more than a few years — I’ve been here 14 years now. I credit that to my coworkers as well as amazing, visionary, supportive managers in our division from the top down who were willing to take chances on putting resources into optimizing online retail long before it was as a big of the marketplace as it is now.The other major highlight of PRH is that the company as a whole has a very open data structure, allowing everyone in the company access to a ton of data on every title even if it’s not one they work on, or if it’s a part of the business that doesn’t directly impact their day-to-day job. That kind of data availability makes it much easier for people to explore all aspects of publishing and really figure out what they want to do in their careers – myself included. And for those who have not worked at many places – I will say that level of sharing data is rare indeed.

Tell us about your hobbies! How do they inform your work-life balance? 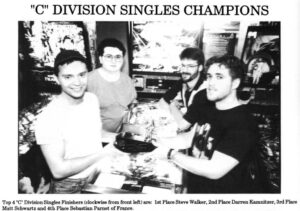 The one hobby that certainly informs my work-life balance is that I am addicted to board games. In the ‘90s, I was obsessed with pinball (having placed in the amateur division for the world championships at one point), but as that artform died away, I replaced it with board games, primarily European ones. It ties into my job nicely, which as I mentioned before, is basically a game whose rules change every day. I’m actually not incredibly competitive – but I love the experience of playing and gradually getting better, and being patient that it may take time to come up with the right strategy to excel. 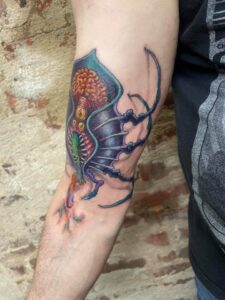 My other hobbies don’t really factor into my job as much. I’m a bit of a thrill seeker, zip-lining and trying to hit as many roller coasters in the country as possible. I still devour horror fiction as well as horror movies, and each year I become a little bit more tattooed, with my body essentially serving as one big art piece of monstrous and alien lifeforms bursting out from beneath the skin. On the less-disturbing side, I adore all animals, including the two cats and dog that let me and my partner live with them.

My dealings with George in the ‘90s was purely through email, and they were all incredibly friendly and appreciative. For people who know him purely through A GAME OF THRONES, it may be hard to understand why I was in such awe that I got to do a couple of early webpages for him. In addition to his early fiction (I think “Sandkings” remains of the greatest horror/SF novellas ever written), he also had written a bunch of episodes of the ‘80s edition of Twilight Zone, which was terribly underrated and absolutely contains some of the best Twilight Zone content of all time.Ultimately, as the web exploded and my own jobs changed, many authors ultimately took on doing their own websites to allow them more flexibility and provide real-time updates, so I didn’t speak to him for more than a decade. But at Random House, I was once again working on various aspects of his online presence for A DANCE WITH DRAGONS. At one point, George came into the office and I finally got to meet him face to face, at which point I explained that I was the same guy who did his first early webpage to which he responded “Holy sh*t, you’re THAT Matt Schwartz?”Frankly, that early work I did for authors and publishers has time and time again come back to provide invaluable connections and insight into the present day. While back in the 90s it was a lot of work done in exchange for books, it has been the origin for so many of my closest friendships.