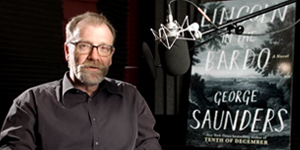 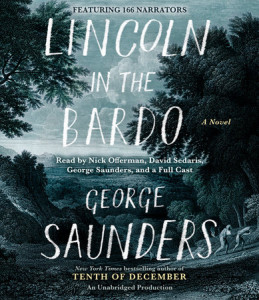 Unfolding in a graveyard over the course of a single night and narrated by a dazzling chorus of voices both living and dead, LINCOLN IN THE BARDO is an exploration of struggle, death, love and the powers of good and evil. On February 22, 1862, a grief-stricken Abraham Lincoln visits the crypt where his eleven-year-old son was just laid to rest so that he might hold his boy’s body once more.

LINCOLN IN THE BARDO is a story told in a thrilling new form that features a theatrical panorama of voices, which reflect how varied the America of that time was by using high diction and low diction, along with beautifully articulate 19th century letters and obscene rants. The audiobook simulates that diversity of voice intended within the book. “I love the idea that by casting actors and non-actors,” Saunders says, “we were able to simulate that ‘I hear America singing’ notion.”

Watch  this video: George Saunders on the LINCOLN IN  THE BARDO Audiobook

Here is the complete list of participating Penguin Random House colleagues, preceded by the characters (in order of appearance) they gave voice to:

A JOURNALIST (from Piatt) – Sean Baker