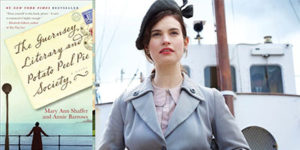 Mary Ann Shaffer and Annie Barrows’ New York Times bestseller THE GUERNSEY LITERARY AND POTATO PEEL PIE SOCIETY, a book club favorite since it was first published by The Dial Press in 2008, has now been adapted for the screen by the production company Blue Print (producers of the Oscar and Golden Globe award-winning film, Three Billboards Outside Ebbing, Missouri) in partnership with Studiocanal and The Mazur Kaplan Company. Netflix acquired the rights to air the film in North America, Latin America, Italy, Eastern Europe, and Southeast Asia. Studiocanal will release it theatrically in Australia, France, and Germany.

The Guernsey Literary and Potato Peel Pie Society stars Lily James, best known for her role in the acclaimed PBS series, Downton Abbey. Directed by Mike Newell (Four Weddings and a Funeral) and filmed in the U.K., the story follows a free-spirited writer, Juliet Ashton, played by Ms. James.  She forms a life-changing bond with the titular Guernsey Literary and Potato Peel Pie Society when she decides to write about the book club, which was formed during the occupation of the small island of Guernsey in World War II. Ms. James’ co-stars include two other Downton Abbey actors, Matthew Goode and Jessica Brown Findlay, as well as Katherine Parkinson (The Boat That Rocked), Tom Courtenay (Doctor Zhivago), and Penelope Wilton (The BFG).