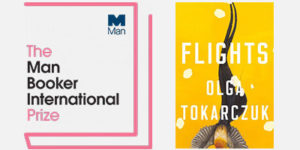 FLIGHTS, a “non-traditional” narrative by acclaimed Polish author Olga Tokarczuk, has won the 2018 Man Booker International Prize, awarded annually to a fiction work judged to be the year’s outstanding work of translated fiction. Translator Jennifer Croft will share the 50,000 pound prize with Tokarczuk.

FLIGHTS will be published in the U.S. by Riverhead on August 14.

This is the third consecutive year a Penguin Random House U.S. title has won the Man Booker International. Israeli author David Grossman was honored in 2017 for his A HORSE WALKS INTO A BAR, translated by Jessica Cohen, and published by Vintage International. And in 2016 Korean author Han Kang won the prize for THE VEGETARIAN, translated by Deborah Smith, and published by Hogarth.

The 2018 five-person panel of judges was chaired by Lisa Appignanesi. She described Tokarczuk’s work as a “constellation novels,” whose stories are sent into creative “orbit” by the writer. In the citation, she said, in part: “We loved the voice of the narrative—it’s one that moves from wit and gleeful mischief to real emotional texture and has the ability to create character very quietly, with interesting digression and speculation.” “Tokarczuk,” the chairwoman added, is “a writer of wonderful wit, imagination and literary panache … [she] “has written a great many books that sound amazing but which haven’t been translated yet.”

Tokarczuk and Croft received their award Tuesday night, May 22, in a London ceremony.