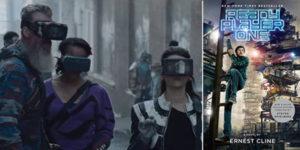 The countdown continues to March 29, when the Steven Spielberg-directed film adaptation of Ernest Cline’s #1 bestselling book READY PLAYER ONE (Broadway) will open in theaters nationwide. The world premiere was at this week’s South by Southwest conference in Austin, Texas, where Mr. Cline was a featured speaker.  Janet Pierson, director of film at SXSW, commented, “The film brings to the screen a story that has captivated millions of readers around the globe, written by Austin’s very own Ernest Cline.”  To help further ratchet up fan enthusiasm, Warner Bros. Pictures has debuted a new READY PLAYER ONE “Dreamer” trailer: “Save the Oasis. Save the world.”