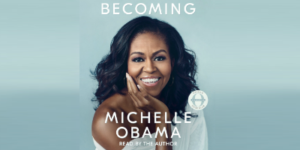 This GRAMMY®  is also a triumph for Penguin Random House Audio, whose imprints’ productions have been awarded the Best Spoken Word Album GRAMMY® three times in the last four years.

Mrs. Obama says of her GRAMMY® win, “Thank you to the Recording Academy for this honor! I had plenty of doubts about sharing so much of myself in Becoming, but this moment is another reminder that when we own the truth of who we are, we give ourselves the chance to connect with others in real, meaningful ways.”

Voted by the membership of The Recording Academy®, the GRAMMY® for BECOMING was announced yesterday (January 26) afternoon in Los Angeles during the GRAMMY Awards Premiere Ceremony®, before the nationally televised GRAMMY® broadcast.

Mrs. Obama’s previous Crown book, the #1 bestselling AMERICAN GROWN: The Story of the White House Kitchen Garden and Gardens Across America, was nominated in 2013 for Best Spoken Word album.

PRH Audio’s most recent Grammy Spoken Word Album winners: Carrie Fisher’s THE PRINCESS DIARIST (2018)  and Carol Burnett’s IN SUCH GOOD COMPANY (2017). In all, Penguin Audios and Random House Audios have been nominated in this category 45 times, and have won the prize 16 of them.

Our Audio colleagues, several of whom attended the afternoon event, are deservedly thrilled about The Recording Academy® recognition for BECOMING.  Congratulations to Dan Zitt, Amanda D’Acierno, and the accomplished Group she leads.  And, of course, the biggest congratulations to our narrator and author, Michelle Obama.