BECOMING, the memoir by Michelle Obama, will be published in the U.S. and Canada on November 13, 2018, by the Crown Publishing Group/Penguin Random House. There will be a simultaneous publication of the book in 24 languages worldwide.

expand
A global publication date of Tuesday, November 13, 2018, has been set for the highly anticipated memoir by Michelle Obama, former First Lady of the United States of America. The news was announced on Sunday by Markus Dohle, CEO of Penguin Random House, which acquired world publishing rights to the book. Titled BECOMING, Mrs. Obama’s book will be released in the U.S. and Canada in print and digital formats by the Crown Publishing Group, a division of Penguin Random House. An audio edition of the book, read by Mrs. Obama, will be simultaneously issued in digital and physical formats by Penguin Random House Audio. BECOMING will be published simultaneously in 24 languages around the world.                   In a life filled with meaning and accomplishment, Michelle Obama has emerged as one of the most iconic and compelling women of our era. As First Lady of the United States of America—the first African-American to serve in that role—she helped create the most welcoming and inclusive White House in history, while also establishing herself as a powerful advocate for women and girls in the U.S. and around the world, dramatically changing the ways that families pursue healthier and more active lives, and standing with her husband as he led America through some of its most harrowing moments. Along the way, she showed us a few dance moves, crushed Carpool Karaoke, and raised two down-to-earth daughters under an unforgiving media glare. In her memoir, a work of deep reflection and mesmerizing storytelling, Michelle Obama invites readers into her world, chronicling the experiences that have shaped her—from her childhood on the South Side of Chicago to her years as an executive balancing the demands of motherhood and work, to her time spent at the world’s most famous address. With unerring honesty and lively wit, she describes her triumphs and her disappointments, both public and private, telling her full story as she has lived it—in her own words and on her own terms. Warm, wise, and revelatory, BECOMING is an unusually intimate reckoning from a woman of soul and substance who has steadily defied expectations—and whose story inspires us to do the same. Said Mrs. Obama, “Writing BECOMING has been a deeply personal experience. It has allowed me, for the very first time, the space to honestly reflect on the unexpected trajectory of my life. In this book, I talk about my roots and how a little girl from the South Side of Chicago found her voice and developed the strength to use it to empower others. I hope my journey inspires readers to find the courage to become whoever they aspire to be. I can’t wait to share my story.” At the time of publication, Mrs. Obama will embark on a U.S. and international book tour, with details to be announced at a later date. Information about the book is available to consumers at www.becomingmichelleobama.com. The print edition will carry a suggested list price of $32.50 in the U.S. and $40.00 in Canada and the digital edition will be priced at $14.99 in the U.S. and $18.99 in Canada. In support of the mission of The Obama Foundation and Penguin Random House’s own commitment to social responsibility, the company will donate one million books in the Obama family’s name to First Book, a longstanding Penguin Random House nonprofit partner and the Washington, D.C.–based partner for the 2016 White House digital education initiative, Open eBooks. First Book is dedicated to promoting equal access to education by providing new books, learning materials, and other essentials to children in need in the U.S. and Canada. An English-language edition of BECOMING will be published in the UK and British Commonwealth territories by Viking, an imprint of Penguin Books at Penguin Random House UK. The book will be published in translation in 23 other languages, including Spanish (Plaza & Janés/Penguin Random House Grupo Editorial); German (Goldmann Verlag/Verlagsgruppe Random House); Portuguese Brazil (Objetiva/Companhia das Letras); Portuguese Portugal (Objectiva/Penguin Random House Portugal); Catalan (Rosa dels Vents/Penguin Random House Grupo Editorial); French (Editions Fayard); Albanian (Dudaj Publishing); Arabic (Hachette Antoine/Naufal); Complex Chinese (Business Weekly Group); Czech (Argo); Danish (Lindhardt og Ringhof); Dutch (Hollands Diep); Finnish (Otava Publishing Company); Greek (Athens Bookstore Publications); Hebrew (Yedioth Books); Hungarian (HVG Publishing Co.); Italian (Garzanti); Japanese (Shueisha); Korean (Woongjin Think Big Co., Ltd.); Lithuanian (Alma Littera); Norwegian (Cappelen Damm); Polish (Agora Publishing House); Swedish (Bokförlaget Forum); and Vietnamese (First News – Tri Viet Publishing Co., Ltd.).

Each year, the American Library Association (ALA) Midwinter Meeting brings forth a cascade of awards and honors accorded distinguished Children’s and Adults books and audios, published (mostly) in the past year.

We’ll be reporting on all our winners ahead. 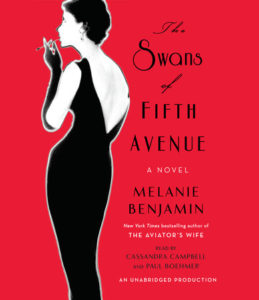 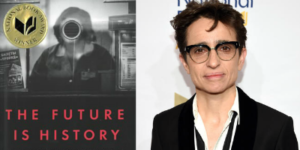 Masha Gessen, author of THE FUTURE IS HISTORY, was honored Wednesday night at a ceremony in Manhattan with the National Book Award for Nonfiction, continuing a cherished, time-honored connection for Penguin Random House authors with one of America’s most coveted literary prizes.

expand
This is the fifth consecutive year in which our authors have won at least one National Book Award, preceded by many NBA long-  and short-listers, as recognized by the respective panels of judges in each of the four categories. 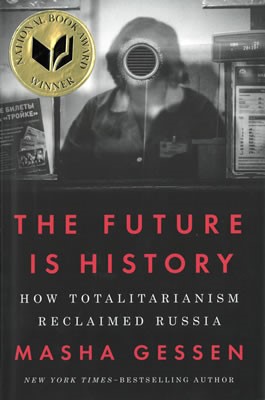 In THE FUTURE IS HISTORY, visionary journalist and bestselling biographer of Vladimir Putin Masha Gessen reveals how, in the space of a generation, Russia surrendered to a more virulent and invincible new strain of autocracy. Hailed for her “fearless indictment of the most powerful man in Russia” (The Wall Street Journal), Gessen is unparalleled in her understanding of the events and forces that have wracked her native country in recent times. She follows the lives of four people born at what promised to be the dawn of democracy. Gessen charts their paths against the machinations of the regime that would crush them all, and against the war it waged on understanding itself, which ensured the unobstructed reemergence of the old Soviet order in the form of today’s terrifying and seemingly unstoppable mafia state. “A remarkable portrait of an ever-shifting era…Gessen weaves her characters’ stories into a seamless, poignant whole. Her analysis of Putin’s malevolent administration is just as effective…a harrowing, compassionate and important book,” San Francisco Chronicle. In accepting her Award, a beaming Masha Gessen spoke without prepared notes—because she “didn’t think this was going to happen.” She told the audience of 750 attendees that her final work ended up a much longer and different book on Russia than originally planned, thanking her publisher, Riverhead, “for sticking with me,” and especially her long time editor Becky Saletan. In congratulating Masha Gessen, Becky Saletan, and the Riverhead/Penguin Publishing Group and Penguin Random House Audio publishing teams, we also celebrate their counterparts behind our six NBA semi-finalists and five finalists for this year’s National Book Awards. The complete list of Penguin Random House National Book Award winners, 2013-2017:   With this Nonfiction National Book Award, we continue a 2017 of extraordinary achievement, in which the highest literary honors have been bestowed upon our Penguin Random House North America authors and their work: The Newbery Medal for LAST STOP ON MARKET STREET by Matt de la Pena, illustrated by Christian Robinson; Grammy® for IN SUCH GOOD COMPANY by Carol Burnett (Best Spoken Word); National Book Critics Circle Awards for EVICTED by Matthew Desmond (Nonfiction); LAB GIRL by Hope Jahren (Autobiography).  Pulitzer Prizes for THE UNDERGROUND RAILROAD by Colson Whitehead (Fiction); EVICTED by Matthew Desmond (General Nonfiction); BLOOD IN THE WATER by Heather Ann Thompson (History); THE RETURN by Hisham Matar (Biography).  The Man Booker Prize for LINCOLN IN THE BARDO by George Saunders.  The Nobel Prize for Literature for Kazuo Ishiguro. We all share our publishing colleagues’ pride and thrill in our authors’ achievements.  What a privilege to be in such company and for all of us to contribute to building their readership.