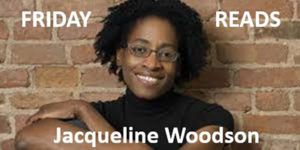 For the first Friday Reads of the New Year, we are focusing on young readers and hope for the future. Penguin Random House author Jacqueline Woodson was just named National Ambassador for Young People’s Literature by The Children’s Book Council, Every Child a Reader, and the Library of Congress. During her two-year term, Woodson, a four-time Newbery Award winner and former Young People’s Poet Laureate, will travel the country promoting her platform, READING = HOPE x CHANGE (What’s Your Equation?). You can read more about Jacqueline Woodson’s appointment here and we invite you to immerse yourself in her award-winning books:

Beloved author Jacqueline Woodson shares the poignant, the gritty, and the sweet memories of her childhood—as well as revealing the first sparks that ignited her writing career—in these lyrical free-verse poems about growing up in the North and South.

I HADN’T MEANT TO TELL YOU THIS MUCH

Twelve-year-old Marie is a leader among the popular black girls in Chauncey, Ohio, a prosperous black suburb. She isn’t looking for a friend when Lena Bright, a white girl, appears in school. Yet they are drawn to each other because both have lost their mothers. And they know how to keep a secret. For Lena has a secret that is terrifying, and she’s desperate to protect herself and her younger sister from their father. Marie must decide whether she can help Lena by keeping her secret…or by telling it.

FROM THE NOTEBOOKS OF MELANIN SUN

Melanin Sun has a lot to say. But sometimes it’s hard to speak his mind, so he fills up notebooks with his thoughts instead. He writes about his mom a lot–they’re about as close as they can be, because they have no other family. So when she suddenly tells him she’s gay, his world is turned upside down. And if that weren’t hard enough for him to accept, her girlfriend is white. Melanin Sun is angry and scared. How can his mom do this to him–is this the end of their closeness? What will his friends think? And can he let her girlfriend be part of their family?

Jacqueline Woodson brings us the story of three remarkable young men—brothers who have only each other to rely on and must decide whether they’ll work with that or let it tear them apart. Nothing is like it used to be. If it were, Mama would still be alive. Papa wouldn’t have died. And Charlie would still be the same old loving big brother to 13-year-old Lafayette, not a hostile stranger, just back from doing time at a correctional facility. Oldest brother, Ty’ree, would have gone to college, instead of having to work full-time to support the three of them. And Lafayette wouldn’t be so full of questions, like why Mama had to die, why Charlie hates him so much now, and how they’re all supposed to survive these times together when so much seems to be set against them.

AFTER TUPAC AND D FOSTER

The day D Foster enters Neeka and her best friend’s lives, the world opens up for them. Suddenly they’re keenly aware of things beyond their block in Queens, things that are happening in the world—like the shooting of Tupac Shakur—and in search of their Big Purpose in life. When—all too soon—D’s mom swoops in to reclaim her, and Tupac dies, they are left with a sense of how quickly things can change and how even all-too-brief connections can touch deeply. Includes a discussion guide by Jacqueline Woodson.

“Hope is the thing with feathers” starts the poem Frannie is reading in school. Frannie hasn’t thought much about hope. There are so many other things to think about. Each day, her friend Samantha seems a bit more “holy.” There is a new boy in class everyone is calling the Jesus Boy. And although the new boy looks like a white kid, he says he’s not white. Who is he? During a winter full of surprises, good and bad, Frannie starts seeing a lot of things in a new light—her brother Sean’s deafness, her mother’s fear, the class bully’s anger, her best friend’s faith and her own desire for “the thing with feathers.”

From slavery to freedom, through segregation, freedom marches and the fight for literacy, the tradition they called Show Way has been passed down by the women in Jacqueline Woodson’s family as a way to remember the past and celebrate the possibilities of the future. Beautifully rendered in Hudson Talbott’s luminous art, this moving, lyrical account pays tribute to women whose strength and knowledge illuminate their daughters’ lives.

Winner of the Caldecott Medal

Ada Ruth’s mama must go away to Chicago to work, leaving Ada Ruth and Grandma behind. It’s war time, and women are needed to fill the men’s jobs. As winter sets in, Ada Ruth and her grandma keep up their daily routine, missing Mama all the time. They find strength in each other, and a stray kitten even arrives one day to keep them company, but nothing can fill the hole Mama left. Every day they wait, watching for the letter that says Mama will be coming on home soon. Set during World War II, Coming On Home Soon has a timeless quality that will appeal to all who wait and hope.